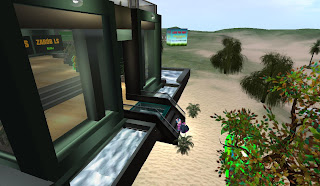 It was a normal day at the Podex Exchange. The tellers were chatting a little about the yearly celebrations held by Linden Labs, a few whom couldn’t wait to go when off duty, and a few whom didn’t like the idea of fighting the crowds. They also talked about going to beach parties, or possibly some of the new areas which had been developed.

Sometime in the middle of the chat, a colorful figure walked into the bank. It was a small pony, a girl. But it didn’t look like the Amaretto ponies they knew of. She was blue, had a colorful head of hair neatly styled, was wearing a dress, and big puppy-dog eyes. 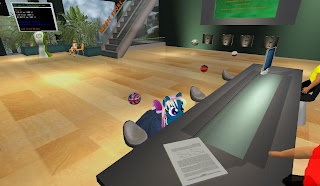 The pony went to a teller, and asked what was needed to get a loan. The teller answered that they did not make loans, but were an exchange service. They would exchange a number of currencies for Lindens, and vice versa. The pony thought for a moment, then told the teller it had a few Euros. A deal was worked out, and the pony soon had some Lindens.

“I’m making a store for other ponies,” the little mare spoke, “I went to somewhere that I heard was for ‘pony girls,’ but it was too scary for me.” The little pony shivered, “I make a much nicer place with lots of color and rainbows. Oh, and apple trees! The place has to have those.” The teller smiled, and wished the little equine well.

The pony then began to walk out. But before it got to the door, a woman waiting at the chairs nearby got it’s attention, “Aww, aren’t you cute. I have something for you.” She offered the small filly an apple, and the pony happily ate it, “Thank you, nice lady.” “You’re welcome little friend.” The pony smiled, “Friendship is magic.” And with that, the little pony left the exchange and went on her way.