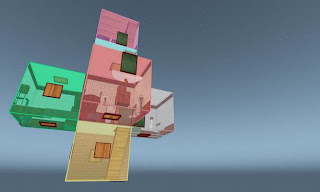 A week ago, SL Newser reported on the "Crooked House" build, whose owner could no longer justify the sim payments. Unless this unusual structure found a new owner, it would vanish.

More recently, we were contacted by a Veritas Raymaker, saying there was more news. We found the house was now on the destination guide, "Visit this recreation of Robert A. Heinlein's 'Crooked House' by Seifert Surface. Explore the interconnected rooms of the house, which is modeled on a four-dimensional hypercube."

But more importantly, it now had a new home, in the Galaxy Quest sim.

Hamlet Au reportedly got in contact with the new owner, whom he declined to name, describing him only as an anonymous academic, "I do strongly believe in doing what I can to help fellow educators who are less familiar with Second Life understand the unique affordances that our world has for education. And Seifert's build illustrates several of these affordances artfully, and in a fun and intriguing way to boot."

So the Crooked House is now safe.