On Saturday night, June 10, Luskwood held one of it's bigger parties. This one was a look back to the decade of Pac-Man, Rubiks Cube, and kids shows around top-selling toys, "Rock the 80's."

It's the final countdown! Tonight at 7pm PDT bring your spandex and big hair to Luskwood's 80's party at Pub Giant Eltee Head to rock out with DJ Zorin. 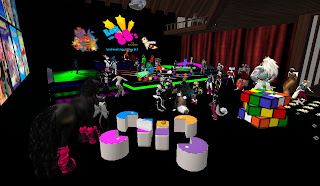 The show was not at the Big Tree, but in a building in the eastern part of the Perry sim with a huge wooden carving of a Lusk head on the roof. Inside, one could find 80's icons around, from the Rubiks Cube and Atari joystick on the floor near the door, to pictures various 80's shows, both cartoons such as "He-Man," and sit-coms like "Punky Brewster." A few of the people dressed up as 80's icons themselves, such as one man in his "Ghostbusters" uniform, and Luskwood's Dougal dancing on the stage in his "Thriller" garb. DJ Zorin was in a "brony" avatar, which is based on the 80's toy "My Little Pony." 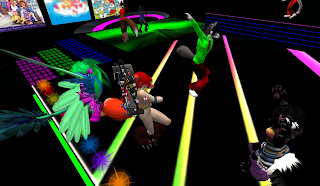 The party was scheduled only to go from 7-9 PM SL time. But like many events at Luskwood, it went late into the night as people showed up late from other events, or perhaps had trouble getting in, as the number of residents in the sim kept hovering at 49 late in the night. Or perhaps people wanted to take advantage of the party atmosphere at the area while they could. Unlike some residential areas which hold parties weekly or a few times a week. Lusk doesn't have this kind of party more than once a month, at times not more than once every few months.

There was much joking around at times. Someone asked Zorin what if in real life he'd change into his avatar at the most inconvenient times, "no hands, just hooves." Zorin wittingly joked he'd just get people to help him out by looking at them with those huge puppy-dog cute eyes of his. The response was, "Yeah, but imagine trying to find glasses for those huge eyes, or contacts."

Of the era, someone had this to say, "The 80s were utterly ridiculous. Ridiculous fashion, ridiculous music, ridiculous TV, ridiculous movies ... but the ridiculousness of it all is what made the 80s so fun. ... every decade does (have it's own weirdness), but none of them stand out as much as the 80s." Consumer products as we know them coming out, the endgame of the Cold War, it was "a time of blatant optimism for the future," and perhaps those are reasons people look back at those times so fondly.