With Mesh being much-anticipated by many, people talking about it’s potential to change Second Life, some have been wondering what the catch is. There have been some whispers that Mesh would mean the end of the usability of Viewer 1-based viewers. But only just now has Linden Lab explained. There are a couple conditions needed to enable Mesh on one’s computer on the Second Life Wiki.


“In order to prevent usage of intellectual property with the mesh upload tool, prior to uploading a mesh with a Mesh enabled viewer, 2 checks will occur before the user will be allowed to upload. The first check will be to verify payment information is on file and the second is a chance to educate the user with a short tutorial. After the user completes the tutorial, they will be enabled to upload content. “


So in order to use Mesh, residents essentially need to identify themselves to the Lab in case someone protests his intellectual property rights are being violated. And if Linden Lab feels there’s a problem, “user can be indefinitely flagged as not mesh enabled.” 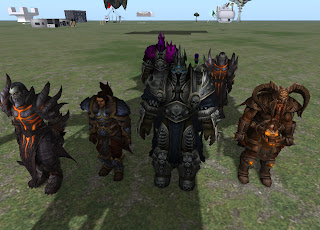 Second Life has had problems over intellectual property before. Last November, the Lindens cracked down on Battlestar Galactica roleplay groups after Universal Studios, which owns the copyright to the TV show, complained. Although one can already reproduce copyrighted items in Second Life, Mesh with it’s promise to revolutionize content creation would presumably make it much easier. And there are some hints of such potential. One of Second Life’s readers sent us a screenshot of what was presumably the Mesh grid. The picture shows likenesses of World of Warcraft characters Deathwing, the Lich King, and others. Pictures like this would certainly make Linden Lab’s lawyers nervous.

Both Hamlet Au and Tateru Nino commented on the issue. Hamlet Au saw two problems, that most builders and scripters on the Grid don’t legally copyright their products, and that “3D files often have a dubious or ambiguous IP rights provenance. For example, when Linden Lab announced that mesh was coming back in 2009, the company's own demo included a sculpture of the Incredible Hulk.” Tateru felt that this would mean free account builders would "have to get payment information on file or be unable to upload arbitrary mesh objects, period."

Naturally, there were a number of comments by readers. One commented to Hamlet, “This is one of the worst ideas I’ve ever heard,” feeling all it would do was hassle content creators. Another commented the more he read about Second Life, “the more I feel Linden Lab is spying on its customers.” But there were others whom could understand the Lindens’ viewpoint. One of Tateru’s readers wondered if this would put nonwestern builders at a disadvantage, “In many countries outside the western world the use of credit cards is not that common.” Another commented, “Someone opened Pandora´s Box with Mesh Imports and now this someone struggles to control it. Good Luck with it.”

Tateru put it appropriately when she commented Mesh’s potential was matched by it's potential for trouble, and “Balancing the two interests is going to be tricky.”