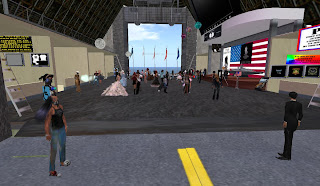 On May 29th, the day before Memorial Day, the US Military Veterans Center at Patriot Island held a Benefit for the Wounded Warriors Project. The event went on for several hours, from 4 to 9 PM SL time. Among the musicians were Waya Snowpaw, Pondman Haalan, Franklee Antara, Frets Nirvana, and Von Johin.

The event was packed, with the number of residents in the sim steadily remaining close to fifty. The musicians played on a stage in front of a model of the USS Missouri, and the American flag. The songs sung were a variety of tunes. Some were simply patriotic, others were cautionary tales. 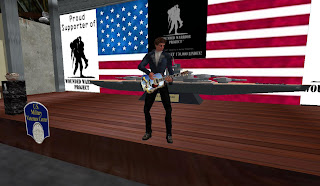 The goal of the event was to raise 170,000 Lindens, collections made from two upturned helmets on either side of the stage. After the last musician got on stage, the objective was reached. But people continued to send over Lindens. The final amount raised was close to 180,000.

The Wounded Warrior Project (http://www.woundedwarriorproject.org/) is a nonprofit and nonpartisan group founded to help wounded Veterans returning from Afghanistan and Iraq. It started by simply providing “comfort items,” but grew “into a complete rehabilitative effort to assist warriors as they recover and transition back to back to civilian life.”

Patriot Island is a veteran-owned sim, with regular events, “We provide information, advocacy and outreach to active duty service members, vets and their families. When you join our group, you become part of a big family that cares about one another and shares info vital to vets. In addition, we provide space to several national Veterans Service Organizations.”