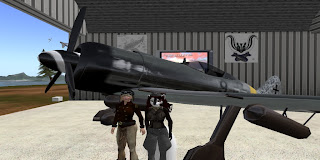 JessicaBelle Dayafter is noted for two things in Second Life. One is being a top pilot in the New Bastogne WW2 combat RP. The second is for being a designer of planes designed for use in this and similar combat RP areas, as well as fun for casual flight. Her German FW190 is her best known plane, but also developed a rendition of the US Navy Grumman Hellcat.

During the planning of the Second Life Newser party JessicaBelle Dayafter agreed to put up one of her JessicaBelle Aeronautic Productions planes as the big prize. The choice of planes was awarded during the second party to Kikas Babenco. We told her to contact Jessica for the plane, as well as sending Jessica a message. 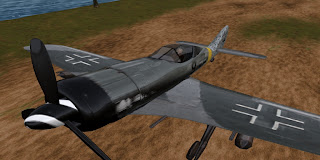 Later on, I had a few words with Jessica. She gave me a few screenshots, “ I took the pics near the Flying Tigers sim, ‘cause the sim owner has my planes on display. She loved them so much.” She told me she had gotten in contact with Kikas and they met up. Kikias was given the choice between the FW190 and the Hellcat, and chose the FW190. There was one small complication, “It was her first time flying in Second Life. So I was trying to teach her.”

The results of Kikas’ training were, interesting, “The FW-190 is real fast. I told her many times this, and not to go above 40% throttle.” Trying it out in the Flying Tigers area, the plane flipped over, and she accidentally pressed the throttle, and the plane “was dragging us along the dirt.” So she had her guest-pilot a slower Stuka. It worked better, “had a leisurely ride around the combat sim,explained in great detail,and was about to have her try again but she had to log.”

The two met up later in the day and training resumed, but they soon found they weren’t alone. One of the opposing team’s pilots had spotter her, “He must really not like me. I was showing her how to fly in the Stuka, we're still almost 2 thousand meters up, and he comes gunning at us. Hee-hee.” And without VICE turned on, the fighter inflicted no damage for all his efforts.

It was an eventful day for Jessica.