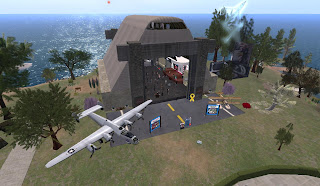 On Sunday February 26 at 8PM SL time, there was a Wounded Warriors Benefit Concert at Patriot Island. The event was organized by singer Mandkind Tracer, known as Seth Regan in real life. Mandkind planed to play for at least an hour, with the goal of raising 275 thousand Lindens.

The event was held in a hangar-like building in the center-east of the sim, next to a B-24 Liberator and a WW1 biplane. People began showing up at the event early. One lady who dropped in ten minutes before the start told me it was already starting to get crowded. It didn't take long for the hangar to become packed with over fifty avatars. 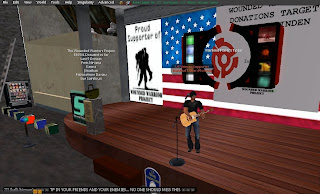 Even before the event started, people had been donating. Frets Nirvana announced at the start they already had 106,000 Lindens donated, pointing to two helmet displays on both sides of the stage. Within minutes, the total passed 150,000 then 160,000. And from then on, the amount steadily increased. Both Frets and the head of Mandkind's fan group Kalli "Brandy" Birman continued to encourage people to donate.

To encourage donations, at one point Mandkind began offering a set of three of his inworld CDs to those donating 1500 Lindens, a discount from his normal price. He reminded listeners that one could burn the music onto real life CDs, and listen to his music outside Second Life. 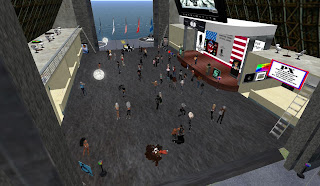 Even after the goal was reached, people continued to chip in. A total of 288,450L was seen contributed, over 1,100 US dollars. Not everyone at the benefit was American, "I am from Egypt and I am proud to help." Mankind played until about 9:30 when he wished the audience well, and ported out. "Thank you so much, Mankind" one of his fans told him. Some in the audience continued to dance away for a little longer before all went their separate ways.

Patriot Island is owned by the US Military Veterans Group. It is in part a memorial site, a replica of the Tomb of Unknowns in the center, so visitors are asked to be respectful of the fact: no firing weapons and no partisan activity. The Wounded Warrior Project is a nonprofit group devoted to "honor and empower wounded warriors" of the US Military. The Project "began when several individuals took small, inspired actions to help others in need. The resulting objective was to provide tangible support for the severely wounded and help them on the road to healing, both physically and mentally."

"God Bless Our Troops." "Thank you all for coming tonight. Hope you all had fun, and hope to see you next month."