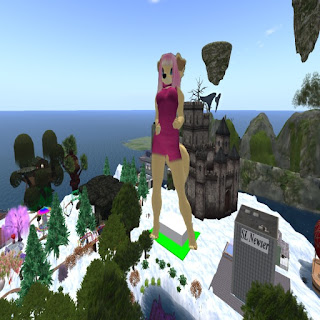 The residents of HV Community, where the Second Life Newser office building is, got a surprise on Tuesday February 22nd. Someone rezzed a giant billboard in the likeness of one of the community leaders, Ranchan Weidman (aka Amaya Heart-Aeghin).

In group chat, people alternated between joking about the build, "I'm going to parachute from the top," to wondering in amazement who could have set it up. No one recognized the name of the builder, who could easily have been an alt. Despite the size, the macro-sized build took only two prims.

Ranchan herself shivered upon seeing the giant image for herself, "it's ... a slightly disturbing concept. But ... I don't have hair like that, or a dress like that. and I don't have a kani dog mod like that. Yet ... the overall look is similar."

Presumably, the build was soon taken down, and still no word on who erected this prank.

Ranchan Weidman owns the land the Second Life Newser's office building is on.