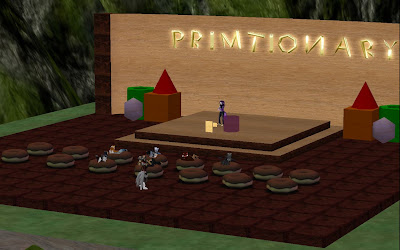 Luskwood has been holding Primtionary games every Wednesday at 7PM SL time. When Jasmine Dawn sat through a session and talked about what it was to Nydia Tungsten, the two put their heads together, and maybe the New Castaway Cove club could have some Primtionary of its own. 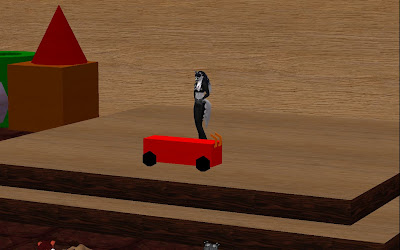 So a Primtionary set was built in the Kalmeere Paradise sim, and for a few hours at 8PM Thursday Feb 2nd and 4PM on Friday Feb 3rd, a number of Nydia's friends came over for some impromptu games. In this picture, Nydia is trying to describe the term "car horn."

Different people had different skills in both building with the prims and getting the audience to guess the word. Myself the word I had gotten was "Space Station." I rezzed a globe, and expanded it's size to take up half the stage, then rezzed a cylinder and put it up in the air next to the globe. Before I could add any details, someone correctly guessed it. 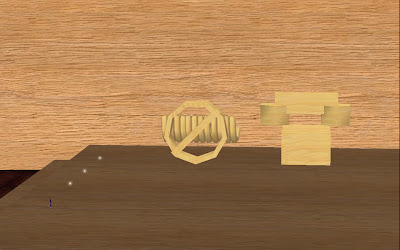 Skilled builders could quickly come up with a description. Here, Lomgren Smalls is trying to describe the term "Wireless Phone."

The participants had lots of fun, and there is talk about a regular weekly-scheduled Primtionary game at Castway Cove, in addition to any impromptu matches.