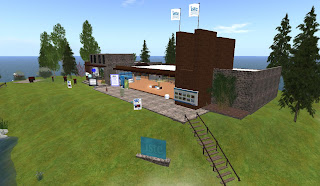 Some sad news for Second Life's educational community.The International Society for Technology in Education will be losing it's ISTE sim in Second Life. February 28 is the last day the sim is due to be up.

Following the end of Linden Lab's discount for non-profit sims, a task force was formed to look into options. They met up on the island on Tuesday Jan 24 to make their decision, and because of the lack of finances, the organization wanting to spend no more than $500 a year, the decision was made to stop payments to the Island.

In his blog, Scott Merrick posted that at it's height, the ISTE held four separate sims in Second Life. It apparently has been very popular with educators on the Grid. The "In a Strange Land" blog read, "ISTE has long been a major player in the SL educational community, and it provided a popular orientation spot for new student and faculty avatars seeking to avoid the freakshows of the public welcome areas."

So what is the ISTE planning? There was talk of moving to a smaller area at the Eduislands 9 sim, as well as discussing moving to the Jokaydia Opensim-based grid. It appears they will be doing both. They are still listening to ideas.

"Thanks in retrospect for all you have shared with all of us at ISTE Island over the years. Thanks in advance for your sharing over this next month. Keep the Faith, whatever it is for you."- Scott Merrick