On Tuesday Jan 31st, the Dutch Supreme Court ruled over a case in which two boys had beaten up a third and threatening him with a knife forced him to log onto the game and drop his possessions where one of his assailants was waiting to pick them up. Most notable were a knife and amulet. The crime took place in 2007, and a lower court found the defendants guilty in 2009. One of them appealed to the Supreme Court of Holland. 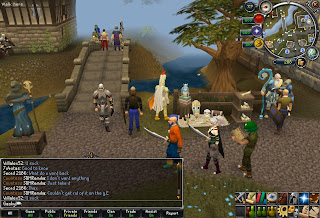 The convicted thief based his appeal on the argument that the stolen goods "were neither tangible nor material and, unlike for example electricity, had no economic value." He also brought up the Runescape terms of service, stating the virtual goods were the property of Jagex, the company behind the game.


You agree that all intellectual property or other rights in any game character, account and items are and will remain our property. Jagex owns all rights in the Jagex Products, and you are only granted permission to use such products, subject to and in accordance with these Terms and Conditions.


The court ruled that the items had value because of the “time and energy” spent in getting them, and at the time of the theft they were the “exclusive dominion” of the victim. Therefore, the taking of these virtual goods was just as against the law as real items.

Tateru Nino thought this ruling was an interesting landmark ruling. Although virtual goods are legal property, in just about every legal jurisdiction they are the property of the “service provider.” This ruling she felt gives the Dutch users themselves property rights to the goods. So at least in Holland she felt, MMOs and virtual worlds didn’t have quite the same power over their users that they used to.

Virtualpolicy.net commented, “This case is significant because it changes the relationship between individuals and service providers in respect of digital objects. That is, Runescape’s contract clearly states that the players of the game do not own the game or any of the digital objects within it, whether they control them or not. This has long been a contentious matter as there is a large trade in the sale of objects between players for hard currency, so called Real Money Trading. This ruling means that there is a degree of control that someone can have over an object which is sufficient for that object to be stolen.”

For now, only Dutch gamers and virtual world residents are affected by this ruling. But there have been similar legal cases in South Korea and Asia in which “judges have displayed a general trend to grant more rights to players than are stated in their contract and to see digital objects as being akin to physical property in certain important respects.” This case could very well influence similar ones that are likely to come up elsewhere in Europe and the Americas.

Currently, Second Life’s Terms of Service allow residents intelectual property rights over their creatied content in the game. But the legal jargon is a bit slippery, Tateru Nino stating Linden Lab says they own “the bits and bytes of electronic data stored on its Servers.”