Looking Back: SLN Auxillary Office near the Lava Pit 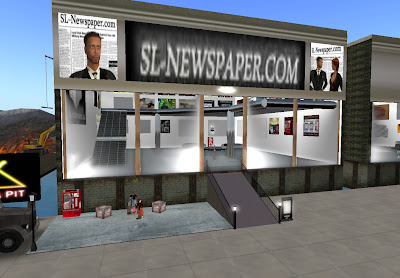 While looking for pictures of the ISM, I came across this picture of an auxillary office of Second Life Newspaper. Longtime readers will recall before Second Life Newser, there was JamesT Juno's Second Life Newspaper, or SLN as it was called sometimes. One of James' favorite locations early in it's history was the Lava Pit Club, which happened to be next to the building James made SLN's first office. It would move soon afterward. Flash-forward a few years, and the Lava pit was getting a makeover. So this auxillary office was set up next door. We never held a meeting there, so it's main practical purpose was advertising. But James always had a soft spot for that club. Guess one never forgets his old hangouts.
Posted by Bixyl Shuftan at 6:00 AM