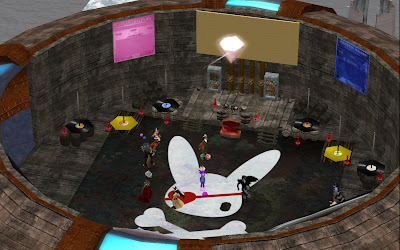 On Sunday, February 5th, Sunweaver Estates chief Rita Mariner posted the following message for those in the group:


Sunnies: The Old Club Cutlass in now gone, the new one has been pretty much built and ready for inspection. Record the LM for the new Cutlass and come inspect it. Indio has done and incredible job!


When Rita transferred ownership of Sunweaver Air, now called the HV Community sim, one of the questions that came up was what would happen to it's popular Cutlass Club. Club owner Jenni Greenfield was inclined to keep it over Rita's land, and so it was decided to move it to Sunweaver Space. But it would be more than just moved, but rebuilt. A few residents thought it was time for a change from the "pyramid" look it had for the past few years. And so Indio Quinnell, with help from Shockwave Yareach, took on the job of constructing the new Cutlass. 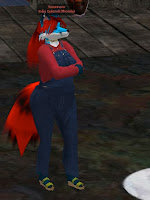 Cutlass had originally looked a lot more pirate, starting out when it was in the Booty Bay sim. So the decision was made to go back to that. It was also desired to give it a look different from most other clubs. The result was a floating saucer, but not a space-age one. Stepping onto the club when it was revealed on Sunday, it had a steampunkish look to it with the rusty steel and steam pipes, some of whic blew steam. It also had something of a run-down look to it, the mall area downstairs having broken steps. Someone joked that the chakat avatars used on occasion, which in the stories could weigh a few hundred pounds were to blame. The dance floor had not a skull & crossbones, but a bunny head outline with a heart-shaped patch over one eye, most likely a friendly jab at Rita's bunnygirl avatar.

With the new club in place, with a few last minute touches still yet to be made such as the DJ board, the Sunweaver residents online at the time threw an impromtu party at the newly rebuilt club (about a dozen more residents showed up after the picture at the top was taken), dancing to the tunes Indio had on.