Spaceport Alpha/International Space Museum Is Back 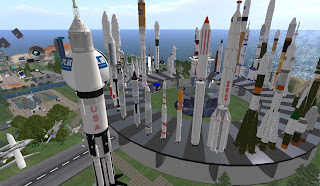 Good news for space fans in Second Life. The Spaceport Alpha sim, home to the International Space Museum or ISM is back online after having been closed for a few weeks. There had been some concerns that the return of the place would be further delayed due to Linden Lab asking for both the back payments and a purchase fee for a new sim. But they were laid to rest when on Wednesday February 22nd the sim was back online for all to see. 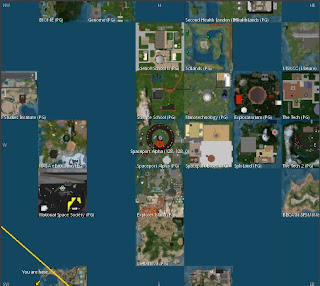 Checking back for myself, the place was fully restored, rockets and all. I thought I noticed a few exhibitions I hadn't seen before, but perhaps they were recent additions I missed on my last trip over.

While at the sim, I ran into the Director, Kat Lemieux. She was happy to have the place back up and running. Just why did the place go offline? "Yes, the person who was in charge got sick, and didn't tell anyone, and ... Well, it was a big mixup. But we're going to make sure that doesn't happen again. ... It was pretty scary for awhile, there. We thought it was all gone for good."

Of the demand that the ISM group pay a sim purchase fee, "The Linden support person who took it down wasn't totally clued into LL policy, but once it was brought to the attention of the right people, it got straightened out. ... that was a low-level staffer. Once somebody higher up with some authority found out, it got taken care of. I understand many of the new support staff aren't very knowlegable about SL, which is too bad, but what can you do?" She thanked the Second Life newspapers and blogs that publicized the sim closing for their help, "those who were vocal about (the ISM), commenting on the blogs, helped make sure it came back. Linden Lab does pay attention to public opinion." 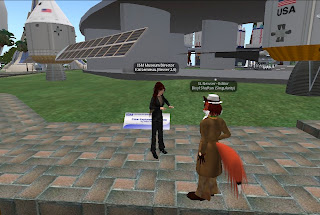 Asking Kat what were the plans of the ISM, "Well, the planning group will resume regular meetings, then we're going to start revising exhibits, and putting on events again. First up is a party!"

They will be having a new exhibit up soon, and plan on having Cypress Rosewood perform over sometime in March. Later on at one of their meetings, they may have a author of "military science fiction."

Kat and I talked on for a while. She pointed out exhibits such as the Apollo Program Saturn V rocket, and the HUGE Vehicle Assembly building, which in real life holds the record for being the largest building in volume on the planet. She told me she had spent much of her childhood living near Cape Canaveral as her father worked there, saying her school would have extended "fire drills" whenever there was a launch, "the country administrator wouldn't call off classes just for 'some clown' in a rocket." She moved before the Apollo Program, but made trips over to see a few shuttle launches. When asked about the people who saw shuttle launches and landings televised at the ISM up to the last one, she grinned, "They got a better view."

The International Space Museum has numerous exhibitions, plus a gift shop where one can buy souveniers, which help fund the sim. There are also various donation jars one can chip in. Spaceport Alpha is one of the Sci-Land sims which are devoted to news and adult education about sciences, especially astronomy and related sciences. The ISM gets no funding from NASA, nor are any of the members of it's group from the government.

To get to the ISM, Click Here to go to Spaceport Alpha.