Apocalypse Not: Scenes Across Second Life As The World Doesn't End

As most readers probably know, December 21st was the day some thought the Mayan "Long Count" calendar, written centuries ago, was predicting the end of the world. Very few people took it seriously. A few people headed to ancient Mayan temples to pray. But for most people, the reaction was to just laugh. At most, some called it a reminder to live their lives more productively as one day each of us has our own personal "end of the world." 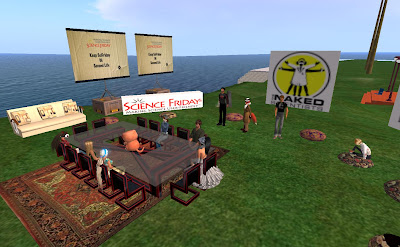 At about Noon, I checked out the broadcast of Science Friday. Among other science subjects, the radio show talked about the facts behind the Mayan Calandar, as well as the people around discussing them. Science Friday takes place every Friday from 11AM to 1PM at Science School (23, 203, 28). 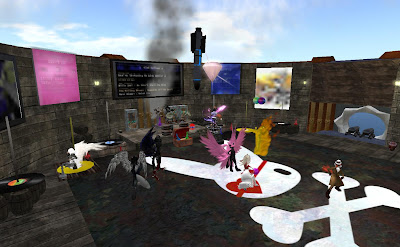 A number of clubs celebrated with parties. Near the SL Newser building, the Cutlass Club in Sunweaver Space (245, 88, 123) held it's "End of the World" party at 6PM with people asked to take an a look appropriate for the Apocalypse, many appearing as winged angelic beings. I never changed mine as in real life, the Press no doubt would be there to cover it. Someone had a nuke hanging overhead, but the club remained standing at party's end. 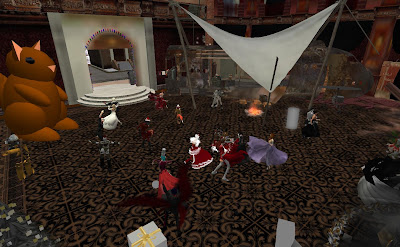 At 7PM, the Steelhead Ballroom in Steelhead (74, 155, 26) held it's own "World's End" party, with Fuzzball Ortega DJing the tunes. The place was packed with a number of residents dancing away. In one corner, someone had placed a half-rusted plane's fusalage made into a disaster survivor's home. There were also a few Christmas trees in the corner, under the larger one a few residents had left some presents under the tree for all, including a clockwork birdie.

Among the song lyrics I heard were, "party at the end of the worrrrld!" and "When the world ends, who will have the last dance?" There was also "Marvin the Martin" muttering "Where's the kaboom?" Eventually Fuzzball had to stop when his track did, "The world may not have ended, but my two hours has." 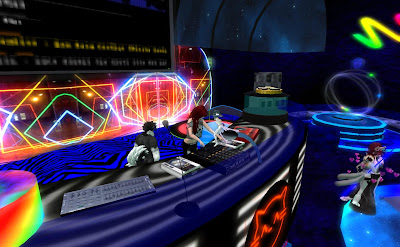 It wasn't technically an "End of the World" event, though it did symbolize renewal. Club Fur, one of the oldest clubs in Second Life, was open again, with manager YuliaV acting as DJ that night. Inviting people over, she was joined by a number of partiers, including some from South of the Border, so a few freebie translators were passed around. Among those showing up was one micro-bunny, whom got a few complements on her apperance. The unique bunny hopped onto the DJ's booth, and danced away.

Yulia was going to play for only two hours, but more people kept coming, so she kept going.

It was a fun Friday night in Second Life, one in which the world, and the Grid, would keep on going.