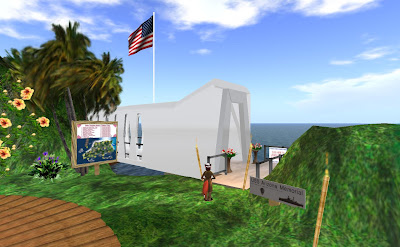 Yesterday, Dec 7th, was the anniversary of the Imperial Japanese attack on Pearl Harbor. And for many, a time to pay a visit to the USS Arizona Memorial in the Oahu sim. Last year was the 70th anniversary, and there was a special ceremony then. This year, there was no event for the first time at the sim in four years, though the sim's theater had a showing of the film "Pearl Harbor."

And residents had a chance to honor the fallen by tossing a lei in the sea.
Posted by Bixyl Shuftan at 6:05 AM