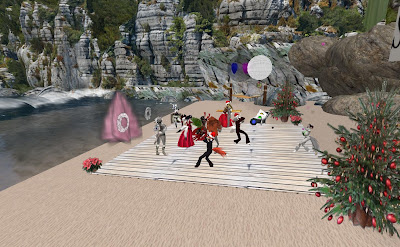 Yesterday at  Noon, Second Life Newser held it's Xmas party, with the help of Nydia Tungsten whom offered to be the DJ. The event was originally going to be at Cova's Cove, but Covadonga Writer couldn't be there. So the event was moved to the beach near Nydia's home in Kitsuhana. There, she entertained the crowd with her set of Christmas tunes. Some classical, some a little twisted. When Grease Coakes showed up, she played DJ Shockwave's parody of "Grandmother Got Run Over by a Reindeer" that was a bit raunchy, "I'm sorry, but I just *had* to play this one. Hee hee!" 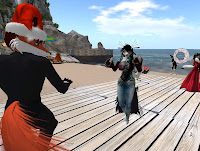 Other songs included "Christmas in Dixie," a "Married with Children" tribute to "The Night Before Christmas," "Trans-Siberian Orchestra," "Chipmunks Roasting on an Open Fire,"and more.

Due to schedule conflicts, the Newser staff couldn't be there all at once, but all of the active writers did show up: Grey Lupindo, Gemma Cleanslate, DrFran Babcock, and Grease Coakes. A number of friends showed up as well. Among those who did were DJ Qwark, Club Cutlass's manager Jenni Greenfield, Dayafter Productions owner Jessicabelle Dayafter, and Areo Pines Park owner Cindy Bolero. One little microfox friend dropped by whom I hadn't seen in a few years.

It was a great time had by all.