Proposal for UN Agency to Control the Internet

It was almost a year ago in which the proposed SOPA bill threatened do away with the Internet as we know it, including places such as Youtube, Facebook, and Second Life. Today, there's something else that's gotten the attention of Internet advocates: a proposal turn control of the Internet to an agency of the UN.

The ITU, or International Telecommunication Union, is an agency of the United Nations dealing with information and communication technologies. At this time, there is an international meeting of delegates in the Persian Gulf Emirate of Dubai to discuss a plan that would hand the ITU control over the Internet. Currently the entity in charge of the Internet is ICANN which does so through an agreement with the US Government with "a mandate requiring that it operate in a bottom up, consensus driven, democratic manner). A leaked document suggested the delegates of some nations were pushing for a global Internet tax. While worrisome in itself, what got Internet freedom activists more worried was that the plan would allow nations full control of how the Internet operates within their country. For repressive nations, this would mean full power of censorship over online communications. Undemocratic countries such as Iran and China, which already censor websites their rulers don't like, would this time have the blessing of international law.

Vint Cerf, the Vice-President of Google, spoke out against the proposed regulations, "only governments have a vote. Some proposals coulees allow governments to justify the censorship of legitimate speech, or even cut off Internet access." Openness, he argued, was a founding principle of the Internet, "Our protocols were designed to make the networks of the Internet non-propietary and interoperable. … allowed for contributions from many sources. This openness is why the Interned creates so much value today." 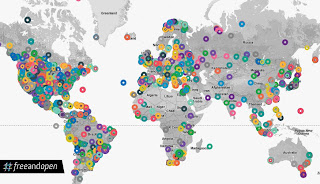 Google has also launched a petition against the ITU proposals, "A free and open world depends on a free and open Internet." As of December 3rd, about one million had already signed, the results shown on an interactive map.  Mozilla, the company behind Firefox, has also acted against the ITU plan with a commentary calling for it's rejection, "Why is ITU Governance of the Internet a Bad Idea," and providing "a kit of tools and resources to support people in making their voices heard at the ITU."

The European Parliament has already rejected the plan for the UN agency to take control of the Internet.