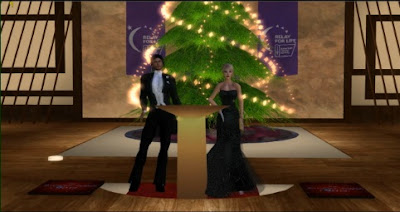 On Sunday Dec 16th at 10 AM, the Avi Choice Awards took place. Sponsored by the Relay for Life Christmas Expo, the event took place where four of the five Xmas Expo sims met up. Elrik Merlin and Saffia Widdershins of "Designing Worlds" announced the winners.

Despite the extra room multiple sims offered, the event was extremely laggy, and many relied on SL TV footage to see. There were also complaints in Relay chat about people getting "bumped" and asked to leave. The event had also been rescheduled from Friday night due to the tragedy that day. So a number of people who won were not there to accept their awards.

Among those winning were the Builders Brewery for best group, Maximillian Kleene for best singer, Racer X's Giant Snail Races for favorite sporting event, and the Relay for Life as favorite event. Racer X said upon winning, "Just found out today that I was even nominated. So didn't get a chance to spam my friends into voting for me, so thank you all that did, that's really AMAZING!! Thank you all for your wonderful support ... we hope you all have as much fun watching the show as me, Tindy, Salem and Safra have making (it)."

The Steelhead community had several nominations, including Fuzzball Ortega for best DJ.