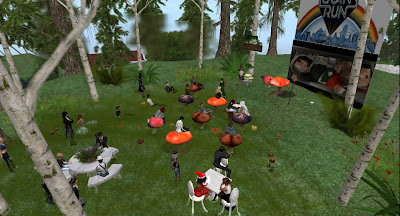 Last weekend, a memorial service was held for longtime supporter of the arts in Second Life Circe Broom. She had passed away after a lengthy period of poor health. The event was held at Poets' Sanctuary in Circe's New Brighton sim.

Last year, Second Life Newser reported on a fundraising event at Circe's Sunset Club. Daniel Voyager wrote that yesterday December 5th from 2 to 9PM SL time, residents gathered at the club to remember Circe, at one point about 86 people were present in the club.

Picture from Gemma Cleanslate.
Posted by Bixyl Shuftan at 6:00 AM