Reflections on a Massacre 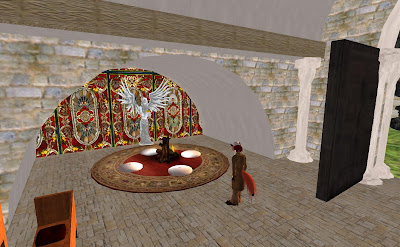 On Friday, the headlines of real life news were filled with reports of a massacre in a Connecticut school, in which 26 people, including 20 kids, were gunned down. And in real life as well as Second Life, people were asking "Why?" Numerous groups yours truly is a part of discussed the tragedy. How could some one just up and shoot down kids? How could such evil could have materialized on the most innocent of souls? Prayer vigils were held in some places on the Grid for the fallen, including the church pictured above.

Both Fox and CNN had people blaming violent video games, much to the irritation of some Second Life residents. Others blamed relatively easy access to firearms by the general public, which triggered some passionate debates in both group chats and out in the open. Liberals argued guns needed to be kept out of dangerous hands, and the average citizen had no business owning them. Conservatives countered people had the right to self defense, if not a duty, if for no other reason the cops might not get to someone's house in time if armed intruders attacked.

With friends on both sides of the issue, yours truly has been listening a lot more than speaking about it, and have heard some noteworthy comments on it over time. I could go on and on about what I've heard, but chances are you the readers have heard most. Best that this reporter can say is be careful about debating your friends about this issue. They believe just as passionately as you, and this is not worth wrecking friendships over.