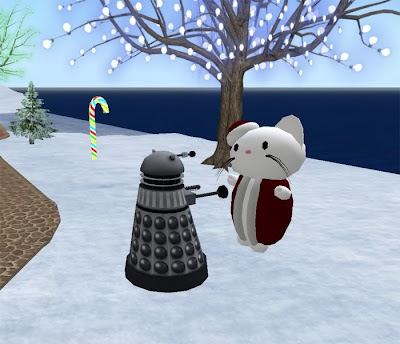 Perri Prinz, noted Second Life DJ and fiction writer, sent in this picture of a "Hello Kitty" build (snowkitty?) that's gotten the attention of a Dalek, one of the infamous robot villains from the "Dr Who" science-fiction show known for their cries of "Exterminate! Exterminate!" So why was the Dalek interested in the Japanese feline with a following among girls across Earth? Apparently only this opponent of Britain's favorite timelord knows, and he's not talking.
Posted by Bixyl Shuftan at 6:05 AM