On Monday Dec 17th, Jessica Lyon announced on the Phoenix-Firestorm blog that support for the Phoenix Viewer would soon come to a close. There had been a meeting Saturday the 15th in which the details were discussed. The news about the viewer support ending was first announced there. The reason: Linden Lab's plans for improving Grid performance in what they call "Project Shinning," which involves what the Second Life Wiki calls "Server side 'texture baking.'" For newer viewers the result will be less lag, at least according to Linden Lab. But for Viewer-1 based viewers, the result is what Oz Linden was quoted as saying "a world of gray, cloudy avatars."

"The clock is now ticking,"  Tonya Souther, the leader of Phoenix-Firestorm's Mac viewer development team, wrote in her blog, "We asked for at least two months' ntice, and yesterday we got that." She stated Linden Lab would like to bring the code active in February, but would work with Team Phoenix-Firestorm and other third-party viewer teams to make sure all have it and work it in before it finally arrives, "you will have to upgrade your viewer sometime in February or early March. No exceptions."

Oz Linden had made his intentions known months earlier in July, which Tonya commented put Viewer-1 viewers on "borrowed time … The loan is about to come due."

Jessica Lyon on the Phoenix-Firestorm website stated emphatically they were not trying to tell Phoenix users what to use, nor were they or Linden Lab blocking or actively stopping the Phoenix Viewer. But there were changes coming, and they had to change along with them. "I realize this decision will not be popular among our Phoenix users, and I apologize for that," but she asked users to read the facts, or watch the Office Hour video she made. before complaining. 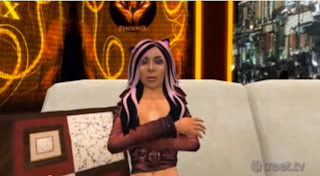 In the speech she made, Jessica reminded Team Phoenix-Firestorm were volunteers, working without pay, whom liked helping people, being appreciated for it, and coding new features. They had created Phoenix more than two years ago in order for Second Life residents to keep using the features of the defunct Emerald viewer. But over time, it was becoming clear updating it with the Viewer 2 features was becoming increasingly difficult. So they created the Firestorm Viewer based on Viewer 2 technology. Continuing to work with the Phoenix Viewer was just simply becoming too difficult. "Can we keep it alive? Yes we can, but it would be a heck of a lot more work than it's worth." If someone wanted to "fork" the Viewer and develop it further themselves, they were free to do so. Though they knew of only "one or two copybot viewer developers" who were doing so.

Support for the Phoenix Viewer would officially cease on December 31, but they were creating a new "peer to peer support group" for those who still insist on using the viewer: "Phoenix Viewer Self Help." "It will largely be a group of Phoenix users helping Phoenix Viewers."

Tonya's comments to those whose computers couldn't use Firestorm or other Viewer 2 or Viewer 3 viewers: It was time to either upgrade their computers, or buy new machines, "Sorry, folks, but you will have to spend some money. There's no way around it."

Responses to both Jessica's announcement and Tonya's blog entry were mostly civil, even positive. Some responders called the move to halt Phoenix development "long overdue," happy to hear the team was free to concentrate solely on Firestorm.  Some, mostly polite, stated they would be sticking with Phoenix for now saying Firestorm didn't work on their computers as well. A couple readers stated that they would be preparing to leave the Grid, one saying, "Thanks everyone on the Phoenix team, the best viewer I've ever used in my time in SL. I'm really grateful and appreciate all the hard (no-pay) work you have done over the years. … But everything has an end, and this will be mine."