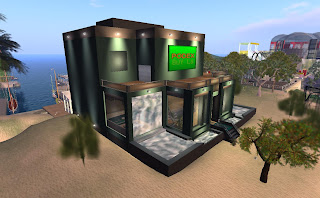 It was a late November day at the Podex Exchange. Fall had arrived, and at times the workers talked about the trees in some places turning red and brown and falling down. Some also talked about the recent Thanksgiving festivities in Areo Pines. And of course there was talk about how some stores were already hawking Christmas items.

It was at this point someone walked into the bank. He was dressed up in Native American Indian fashion, with a loincloth and belt and feather on a band on his head. He was also furry, with dark gray and nearly white hair over his body, a tail with black and dark gray bands, and the fur around his eyes black, making it look like he was wearing a mask. 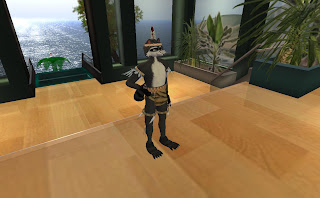 He got the attention of the tellers right away, "Clumsy Cooper!"

The visitor looked puzzled, "Uh, who are you talking about?" He asked in an thick Eastern European accent.

One teller then looked relieved, "Wait a sec guys, that's not Clumsy. Those markings aren't the same. Whatever costumes he wears, Clumsy never changes his stripes. Besides, that's not his voice."

The visitor raised an eyebrow, "Is something going on?"

"Oh, sorry Sir. Long story. Anyway, what can we do to help?"

"Well, my sim is having a late after-Thanksgiving party for the Americans who were out for their holiday, and well, we are a bit short on Lindens.  Could I get some with Euros instead of American dollars, or even better, Rubles?"

"So you are selling Lindens for Rubles now?"

"Basically a disclaimer saying if something goes wrong with the transaction, Linden Lab isn't responsible. If you want to buy or sell Lindens for Rubles here, you'll get your money. Those purchasing Rubles will have to wait a day or two for their first transaction, but they will get their money." 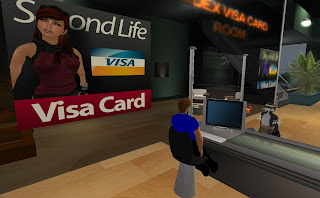 "Ah that is good news. May I ask what is this 'Second Life Visa Card?'" This visitor glanced to the sign.

"It's an anonymous card with it's own bank account, issued by the Bank Zachodni WBK, one of Poland's largest banks. You can load it with Paypal, money bank transfer, or Linden dollars from Second Life. Then you can use it in real life."

The exchange of Rubles for Lindens was quickly taken care of. The credit card took a little longer, the visitor in Indian garb taking a little time to go over the terms, then applied.

"Thank you. You'll receive your card in the mail soon."

"Good. Now I have a little something to tell my friends. Half the Americans think we are still under Communism, or close to it."

"If I may ask, why the Indian outfit?"

They chuckled, and the visitor happily left with his Lindens.

The Podex Exchange is located at Moonbeam (26, 223, 34), with a website at http://www.podex.info/ . Jacek Shuftan is the CEO. Podex has recently been offering an SL Visa Card, aka "Second Card," with details at http://www.second-card.com/ , as well as setting up an office in Avination to trade $Cs for international currencies, and expanding their list of currencies to include Russian Rubles.