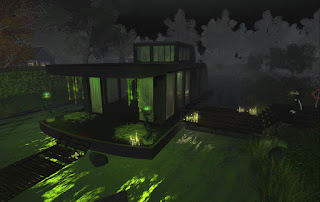 The Millbank region has undergone a spooky overhaul, with numerous Linden Homes getting a haunted horror theme. Visit the Halloween Haunted Neighborhood and explore the many haunted houses and see the scary sights! Take a step inside the homes while you’re at it: we have such sights to show you... 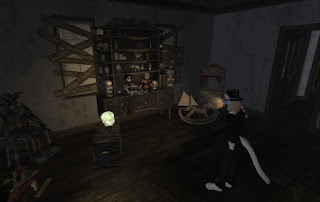 Milbank is in the middle of northwest Bellisseria a bit east of the lake. Getting to the location marked in the blog, the place was eerily dim. There was a flashlight on a table available, though it just gave enough light to make some of the sights even creepier. There were plenty of unsettling sounds as well, from screams, chainsaws, sickening-sounding thuds, what sounded like something being sucked into a swampy muck, and more. Some of the houses were walk-in, as well as a spooky graveyard. One house with a "for sale" sign next to it exploded as I walked by. 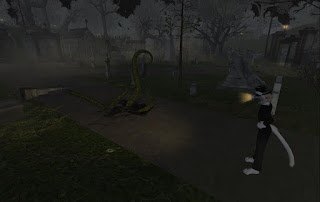 Stepping outside of the sim, the spooky darkness faded and the homes were now normal. But considering my encounter with zombies in the past in Bellisseria, I wouldn't go afk for long anywhere near this sim.

As October starts, it's a spooky fun way to help start the Halloween season, courtesy of Linden Lab's moles.