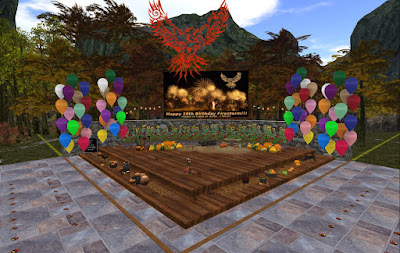 After being delayed for about a month, Team Firestorm, the volunteers behind the Firestorm Viewer, is ready to throw it's tenth anniversary bash. It's real anniversary was actually last month, September 3 2010 being when the team (known then as Team Phoenix) was formed. The event starts at Sunday October 18, Noon SL time, and will last for three hours to 3PM SL time. Each hour offers music from three big-name musicians.

We’ve lined up 3 BIG names to bring us live performances through our 3-hour party!

As with most of their anniversary events, Team Firestorm is offering presents to it's fans. One is a tiger from Wild Kajaera. The other, appropriately enough, is a pet phoenix made by Rezz Room.

Rezz Room is celebrating Firestorm’s anniversary by donating an incredible, animesh, fiery Phoenix companion pet. It can be worn or rezzed and can be set to a radius or to follow its owner.

The SURL of the location hasn't been officially announced yet, the team asking you check their blog an hour before the event. Though a search for Firestorm-owned places revealed a likely location high above their sims.

Once again, the party is on Sunday October 18, from Noon to 3PM SL time.