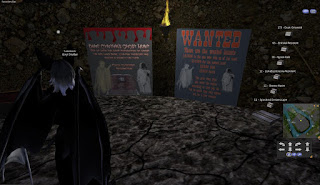 It's Halloween, so time for this year's spooky attraction at Caledon Downs. In the past, they've had haunted trails and a spooky shooting gallery. This year combines a bit of both with a "Ghost Hunt." A notecard about the event had the following

We are fed up with the high population of ghost that appear all across our region. Therefore we are announcing a bounty on them. There are 4 levels to achieve. The levels are for who gets the most of these ghastly specters. The rewards are for the most L$1500, 2nd most L$1000, 3rd most L$500, 4th most L$250. You may use what projectile firing weapon you like. These ghost are popping up all over Downs but only appear for a few seconds before vanishing again so you will have to watch carefully and move around. 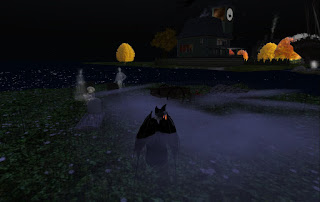 The "hunting lodge" so speak is the Goblin Cave Community Center located in the center of Caledon Downs. In there is located the information panels and the totals counter. The hunt will last till the end of the Halloween Dance at the Goblin Cave at 8PM SLT on Oct 29th then the winner of the bounties will be announced. Course there is no bag limit and season ends on the morning of Nov 1st. giving more time to just enjoy hunting.  Have any questions contact Dame Cynthia Farshore or Duke Shockwave Yareach.

As the notice says, any projectile gun can be used in the hunt. I just used an old freebie popgun. Presumably those interested in taking part know how to go in and out of mouselook. Looking around the sim, I found ghosts in various places. A few places on the sim have more concentrations than others. When hit, the ghosts say one of several various comments, "Hey, I'm already deceased!" "Dead again!", then vanish. They won't be gone long, and will soon reappear, sometimes with the sound of spooky laughter, but only for a few seconds. They still count as additional kills for score The kill counter as stated is in the Goblin Cave, located not far from the bar counter. It lists the best several scores. Also as stated, Linden cash prizes are being offered to the four best shooters, with 1500L going to the top scorer, 1000L to second place, 500L to 4rd, and 250L for fourth. It should be noted that just because you're on the scoreboard doesn't mean you'll stay there as new hunters enter the game and those already in get higher scores. Those whom want the top prize can't relax until the contest is declared done at 8PM Thursday October 29 at the end of the Goblin Cave Halloween Dance. But the game will go on until early November 1, the morning after Halloween, for those whom want to keep on hunting ghosts.