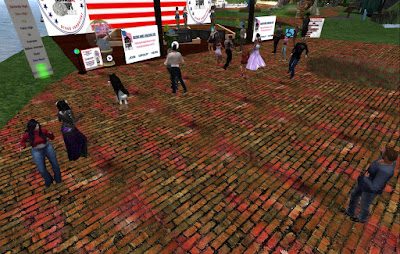 On Sunday September 27, Veterans Isle held it's monthly benefit concert. One DJ and several live musicians performed for the crowd over the course of the five hour event. Scheduled to do the music on stage were DJ Waya Snowpaw at 4PM, Nina Setner, at 5PM, Miha Shamen at 6PM, Amforte Clarity at 7PM, and Hogan Baily finishing things off at 8PM. As they played the tunes, the audience donated Lindens into two house-shaped kiosks on either side of the stage. Occasionally, someone would challenge the crowd to donate so much in a certain time period, offering to match it.

When the event was over, a total of 132,600 Linden dollars had been raised.

The money collected goes to the Homes For Our Troops charity. To learn more about Homes for Our Troops visit https://www.hfotusa.org .
Posted by Bixyl Shuftan at 6:02 AM