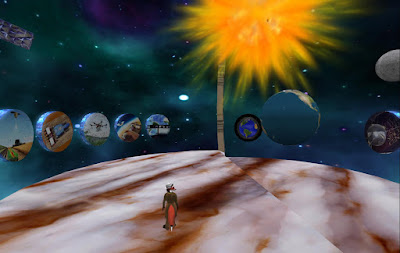 It's "World Space Week," defined by Wikipedia as "an international celebration of science and technology, and their contribution to the betterment of the human condition" in ninety-five countries. The theme this year is "Satellites Improve Life." So the National Space Society invites residents to "Come learn about the many ways satellites are pivotal in producing the food we eat at our Farm-Space Connection exhibit created by Starfarer."

Arriving at their sim over three thousand meters above, to my right was a globe. It was their exhibit. Going inside, there was information in a number of boards.

When the first satellite was launched in 1957, not many would have known quite what an impact this technology would start to have on the way so many of us interact with the world around us.

Fast forward more than half a century, and few industries benefit more from satellite technology than agriculture. From the day they helped improving weather forecasts, farmers have been fans of those orbiting objects in the atmosphere. But these days, satellites are impacting farming in far bigger ways.

For more information, check out the exhibit. While there, residents can also check out the Niel Armstrong Library, the Apollo exhibit, and the Astronaut Memorial.