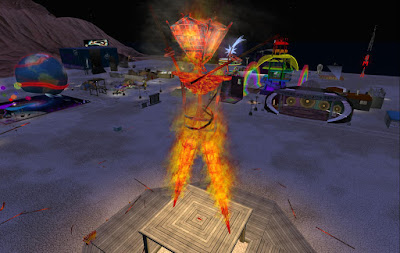 Quite a bit happened this weekend in Second Life. The last official events of Burn2 took place, including the Burning of The Man (above) on Saturday October 17 and the Temple Burn on Sunday October 18. Also on Saturday, the annual "Scare Me Silly" Halloween-themed event by Team Diabetes began. On Sunday was the Tenth Anniversary party of Team Firestorm. The weekend would also see events for the Relay for Life's "Making Strides."

More on these and other events later.