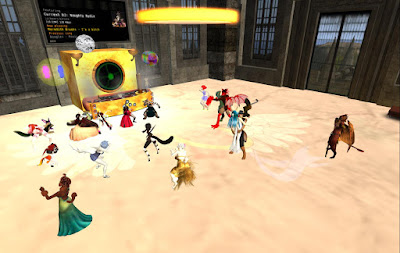 It has been two years since you first met Kevin Baron, well he is back with the release of the second book in the "Switched Destinies" series "Kevin's' Return" We will also be celebrating Dusk's RL Birthday. The Lady Nydia will be the DJ for you today spinning the hits from the 80's, it will start a bit early today at 3pm SLT as well as a different location ...

For those who haven't read the first story yet, Nydia explained some about it in an interview.  As for the sequel, there's the book's description:

Four years ago, Kevin Baron was an engineer whose experiments resulted in him changing places with his counterpart in a parallel universe. He ended up in a world much like Earth, but with many differences. The people here resembled the animals of his homeworld. Instead of technology, people relied on magic. With the help of his newfound magical abilities and new friends, he ended up the head of a house that was among the most powerful in the land.

But while Kevin's determination to do what is right has made him many admirers and allies, it has also made him enemies who do not appreciate having the old ways questioned or him getting in their way. Foes and opportunists can strike just about any time. While some strike without bothering to prepare, one carefully plans something to remove him and destroy what he has accomplished. It will take a powerful new ally, and the love of his family, to keep Kevin from losing almost everything.

The party took place at Mouse Hole Manor in Pacific Waters. People were quickly showing up, Nydia herself in her "Mix" avatar based on a character in the story. It wasn't long before the sim's capacity of 20 was reached. And the party moved to the Happy Vixen's Halloween Haunt area, where more people joined. About thirty people in total came by.

"Switched Destinies: Kevin's Return" is available on Amazon. One can get the paperback for $11.00 USD or the Kindle version for $4.