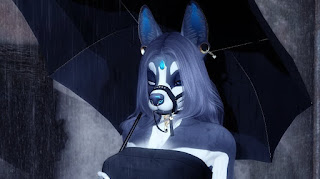 A few days ago on October 20, customers of Rainworx Labs got an unpleasant surprise. The owner, Rain Puddles, had been permanently banned from Second Life by Linden Lab. The reason? For having a claw game at her store. The Marketplace store for Rainworx was also down. She would post about it on Twitter, her attempts at reasoning with Linden Lab being ignored.

So @SecondLife perma banned me for something I was not aware of. The product I was banned for using is still avail on the MP. How is this fair?! every ticket I submit is an automated reply with the same wording. I just called them on the phone to talk to a human being still nada 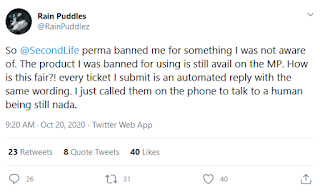 She would later say the claw game in question was apparently considered gambling by the Linden who banned her. She would add it was at other peoples' stores and there was no Linden dollar payout, and that she had heard nothing from Linden Lab until the babn, "They have claimed I have been warned several times and I was not. The only thing I have received from LL was a ticket they opened that I wasn't even aware of since there was no emails about it until I went to submit a ticket I didn't even know it exissted. ... I have grown my business' on SL for 10+ years to just have them take it from me is so heartbreaking."

Word soon got around about what happened. The Newser heard about it from a friend on our Discord channel. Rain would get a number of replies. "This whole situation smells of stinky vindictive bull****." "It just blows my mind that they wouldn't take every possible step first to ensure you were contacted in some way, even going to direct messaging, and then removing the machine. Or hell, why not just remove the machine, give you a notice and a slap in the wrist, and go about it?" "This is so unfair. I hope you'll be able to fix it, and that LL will see how this was a honest mistake."

Eventually, someone came up with what the issue was, "It's been a law case in California for years now. Essentially California courts ruled claw machines are technically gambling on the account  of not being guaranteed a prize. And because gambling is illegal in California, any definition of gambling follows." But in the words of one person on Twitter, "I didn't know that a claw machine would be considered gambling, I honestly don't know HOW MANY residents know either tbh."

Eventually, Patch Linden responded on Twitter that he was looking into the matter. The following day, Rain would announce the ban had been lifted.

So good news! @SecondLife @LindenLab have decided to unban me! I want to thank everyone for their support during all of this and thank you @LindenPatch. My marketplaces are still not available so please bare with me.

As of the writing of this article, Rainworx Marketplace is still down. But the items in the mainland store have been discounted. A Marketplace search would reveal a few claw machines up and available for sale. Talking with friends about the incident, a few considered it an example of Linden Lab's behavior.

In any event, a big misunderstanding has been cleared up.