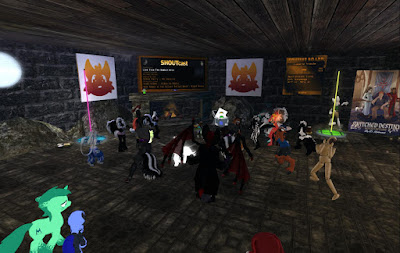 On Sunday October 25, the Happy Vixen held a special event at it's Halloween Haunt. It was the Luskwood Tribute party. For those who don't know, Luskwood is the first and longest lasting furry community in Second Life, possibly the oldest that is still going. For years, it held annual anniversary events. But the one in 2017 was the last they held. Since then, they've had to postpone then cancel the events. In 2018, the staff of the Happy Vixen offered to host a tribute to them to celebrate their turning fifteen. This year, the club decided to hold another.

Tonight we are celebrating Luskwood's 17th Anniversary! All of Luskwood's avatars and clothing from years past are in theme. Come on up to our Special Events Club and party with us for the next three hours with our wonderful DJ Snowbuns!

From 3-6PM SL time, besides people from the beach club, a number of people from Luskwood were also there. There was Ardy Lay, Saunder Hand, and others. And of course Luskwood founder Michi Lumin. There were also a couple ponies from Trotsdale, which Luskwood has a close relationship. And there was Prof. Grey (BrianL61 Landar) of Arcadia Asylum.

For three hours, DJ Snowbuns played music for the crowd. Close to thirty people showed up for the event. The normally 250L prize for the contest was boosted to 2000L by a generous donor. It was split at the end of the event by Go Fish (Swiftkill Resident) and Fortunas Sands.

Luskwood will likely have something special for Halloween. It's not a sure thing with real life butting into peoples' plans. But a way to celebrate their anniversary had been found.