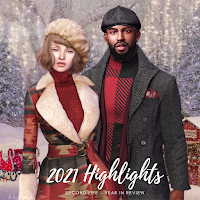 On the official Second Life blog a few days ago, Linden Lab had their "Year in Review" for Second Life. It described 2021 as a "Year of transition."  They talked about:

The passing of CEO Ebbe Altberg and other changes at Linden Lab, such as the retirement of Oz Linden.

The completion of their move to The Cloud, and other performance improvements that the Lab claims resulted in overall less stress for avatars, such as 35 percent fewer crashes on average.

"Marketing the Metaverse," with Facebook's move into virtual worlds resulting in new attention on Second Life, and a new Second Life commercial.

Various partnerships, such as with the NFL, Titmouse, and Zenescope.

For the complete year in review, from Linden Lab's point of view without any mention of controversies, Click Here.