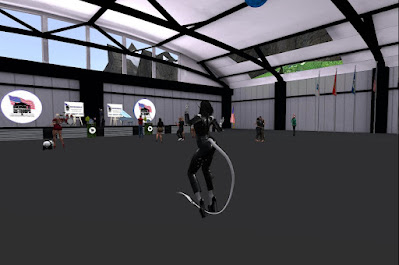 On Saturday December 19, Veterans Isle held it's monthly fundraiser concert. The event was to raise money for the Homes For Our Troops charity. It was organized in part my guitarist Frets Nirvana.

We are conducting our last USMC Homes For Our Troops benefit tonight …hoping to hit 250,000 linden!!  Up next is BG Singer at 5 PM.

To encourage your kind giving look at this lineup! Up next is BG Singer

We are having a great night …come on out and really get into the spirit of giving to those who have sacrificed so much for our freedom.

Instead of the usual stage at ground level, the event took place at the USMVC Events Hangar above the sim. As always, people donated cash to two house-shaped kiosks on either side of the stage.

Some of the people were wearing black armbands, "In memory of Dahlea Milena." Dalhea was one of the volunteers at the monthly event over the years. She had passed away earlier in the month on December 7. The cause of death wasn't know, but she was known to have cancer.

At the close of the event, a total of just over 200,000 Linden dollars had been raised.