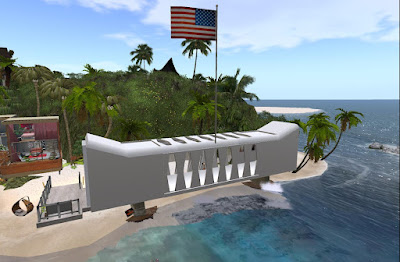 It was 80 years ago today, Sunday December 7, 1941, in which the Attack on Pearl Harbor took place. An Imperial Japanese task force that included several carriers sent over three hundred planes against the US Pacific fleet. Many American ships were damaged or sunk, over a hundred US planes destroyed, and over 2400 Americans (including 68 civilians) were dead.

Over half of those dead were lost on the USS Arizona, which suffered catastrophic damage when an armor-piercing bomb detonated in it's forward magazine. The other battleships sunk in the shallow waters would later be raised to fight again. But the Arizona was left as a memorial to it's perished crew. In 1962, an official memorial would be built over the remains of the ship.

In Second Life, there have been temporary USS Arizona Memorials set up, such as the one at the Veterans Tribute every November. But the permanent one is at the Oahu sim. Ten years ago for the 70th Anniversary, there was an event to honor the American servicemen who perished. No events are known to be planned today. But people are free to come by and reflect, and perhaps throw a lei in the sea with the press of the sign. A counter continually reads the names of the sailors who fell that day.