Announcement: This Saturday at The Science Circle - "A Biological Perspective on Mating Dynamics" and "The Future Is Now" 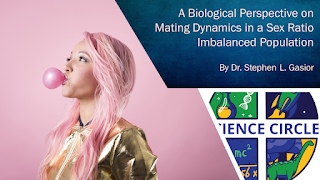 The basic tenet of biology is reproduction to continue the species. Evolution and genetics has programmed every species’ to follow behaviors to ensure the next generation. This genetic programming influences the mating game between the sexes in those species even in “higher” cognitive species such as humans. The interplay between conscious and subconscious driven behaviors is increasingly complicated to understand as society becomes increasingly complicated compared to “cave-man” days. One aspect of human biology without intervention is that the birth rate of male to female is 50/50. One aspect of most historical and modern societies is a cultural trend towards life-long pair bonding being encouraged and even legally enforced in some cases. Research has suggested a correlation to economic and social stability in such monogamy encouraged societies.

China and India are notable case exceptions to the gender balance. Cultural practices has lead to an overabundance of men. These have important consequences for the mating game in those countries now and the foreseeable future. Japan similarly has had cultural practices leading to a current stagnation of dating today, developing the monikers: dating “‘herbivores” and “celibacy syndrome”

This presentation will explore initially the biology of sexual reproduction in vertebrates and humans, the development of monogamy practices in history, then look to reconcile or at least understand better the current society/cultural situation in these countries. 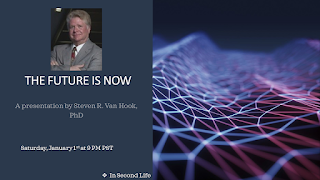 "The Future Is Now"

In a daily fog of uncertainty, we may lose track of transformational changes just over the horizon. So where are we headed? Some of the world’s smartest people in government, social research, academia, business, economics, science, and other fields have looked 20 years into the future and seen a time of abundance and shared opportunities. Let’s update on evolving technologies and trends from an optimistic perspective beyond the turmoil of today.