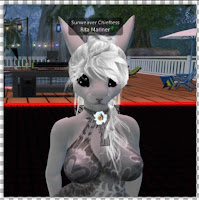 Penny Shuftan recently had a chance to talk to Rita Mariner, the leader of the community of which the land is where the Newser office makes it's home. The "Chieftess" of the Sunweavers, as she calls herself, had a few things to say about the group, it's Relay team the Sunbeamers, and herself.