More on The New Linden Homes 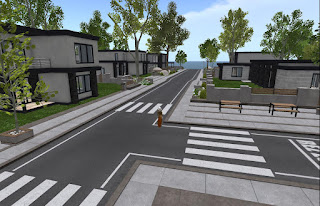 On Monday December 6, Linden Lab revealed their latest style of homes to be offered to Premium residents: the Newbrooke. They were in a temporary sim, "Linden Reveal," in the northeast corner of the Christmas Expo grounds, just north of Calling Birds. But the sim went offline the following day, and did not reopen until Thursday. The houses, which were all gray, were now in several more colors, brown, sand/light-brown, red, white, and bluish-green. Compared to the previous several designs, Fantasy, Chalet, beach houses (aka stilt houses), Victorian, log cabin, and trailers, my first impressions of this design were, ordinary. They looked pretty much like what one would expect in a typical North American suburb. As Panthera Polnocy put it, "We got box homes." Some didn't like them: "Looks pretty plain to me, I'll stay with my Victorian Home." "Looks like cheap garbage from 2017." " ... the houses themselves are dare I say it? UGLY." Others could see themselves in such homes, "The more I look at them the more I think I will enjoy trying my hand at decorating one.  It seems to be a completely blank slate with the minimal landscaping used in the demo area." 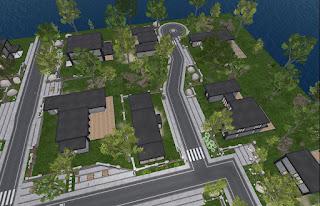 Looking around, I would find eight styles of the new Linden Homes.

The Aldridge was a two story home, with a front porch, and a small patio area to the back and side.

The Bradbury was one story with large front and back patio areas, with a large left wing.

The Coniston was one story, with a small front porch and back patio, with a larger middle room with two side sections.

The Denver was one story, with a front porch and a large covered patio area to the side.

The Faraday was one story, and symetrical in shape, with left and right wings with two small rooms each that bordered the main one.

The Gatewood was two story with a front porch, but the second story was smaller, with a patio deck. 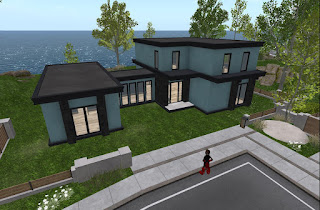 The Heaton was a two story home with a smaller second story, with the smaller part of the first floor connected to the rest by a hallway.

Of the surroundings, the houses had concrete fences, with trees and rocks between them in places. There were a few community areas, one a water area with concrete blocks, another with chairs.

Probably the biggest advantage the homes have to offer is that their simplicity would allow more prim space available to decorate. This would make them attractive to many whom want to put up lots of items. But that this design is so plain compared to other themes will limit their popularity with many.

As of now, there is no word on when these houses will be available to live in. Probably not for some months, in Spring 2022.