Those who read DrFran's article from earlier this month may remember she described Sansar as "on life support" with "all of the employees have been furloughed, and many have gone on to other jobs," and it's license for Umbra, which helps it's graphics to run better, had expired. So last week on December 22 when noted blogger Ryan Schultz couldn't get on, he assumed the virtual world had died. New World Notes would also report it was offline. But the next day, people were able to get back on the virtual world. Inara Pey would say, "services came back on something of a rolling basis, with all avatar services being about the last." 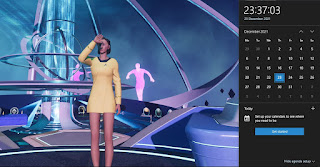 Exactly why the virtual world was knocked offline for a day is still unknown. While one can easily pin it on the lack of technical support, it's notable at the time there was an outage with Amazon Web Servers which is known to have affected the Epic Games Store, Imgur, and other places online. So that may have has something to do with the outage. While Second Life uses Amazon Cloud servers, it is unknown what effect if any the outages had on the larger virtual world.

While Sansar may still be around, it's still a virtual world in trouble. So while the reports of it's demise might have been mistaken, unless things change for the better for the place, it could soon go permanently offline for real.

Sansar was created by Linden Lab, officially going online on July 2017, as a next-generation virtual world. But it's numbers remained small, so Linden Lab would eventually sell it to Wookey Technologies in 2020.

Update: DrFran reported a response from Wookey management on December 26:

hi there. this is steve from the wookey management - sansar team. i thought i'd pop in to let you know we are actively looking to resolve the issues on the platform. we value our community big time, and hoping we can get things running smoothly soon. ... we appreciate your patience and understanding... happy holidays from the wookey team!!!