It has been confirned by a reliable source that Alleara Snoodle has passed on. To those not familiar with her, she was a highly skilled builder and scriptor whom was with the Sunweaver and Chilbo communities. She was also part of the Relay for Life in Second Life. 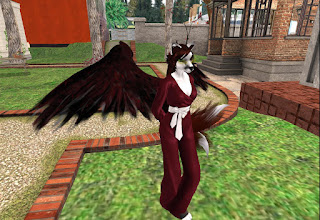 Alleara. or "Allie" to her friends, was from Germany, though talking to her she told me she was born in Romania and later she and her parents would emigrate from there. She first logged on in July 2008. She soon became part of the Metanomics group, as well as becoming established in the Chilbo and Sunweaver communities. She's known for having taken part in the building of some Passionate Redhead camps, and the Chilbo community held at least one Relay fundraiser, in July 2010, that the Redheads were a part of. But she also worked behind the scenes on a number of things from clothing to avatars. She was a longtime helper of one brand named Allissandrea. More recently, a few years ago she helped get the Yinglet avatar up and ready on time for it's release event. Just how many projects she helped may never be known.

Besides her skills as a builder, Alleara was also an artist. The picture of the editor at the Newser office was done by her. She is known to have done some singing. She's also taken part in a number of Nydia Tungsten's music videos.

Sadly, Alleara was physically disabled, having suffered injuries from a fall some years before coming to Second Life. She would also end up in an automobile accident in later 2010. She would have to stop singing and drawing, and stepped down from her position in Chilbo though continued to keep in touch with the artistic community. Down but not out, she eventually went back to scripting and building in Second Life, though usually behind the scenes on the projects of others. She would find some work as a consultant to a major real-life business a few years ago. While she spent less time online, she never did stop coming to Second Life.

It should be noted Alleara and I were friends, having met around 2009, and meeting up regularly for a time. I found her to be brilliantly smart, but she also very compassionate. She had a way of sensing something was wrong with a friend, and would listen for a while as to what the problem was. She had many friends and admirers. She had several avatars, but was best known as a winged white vixen with red hair. 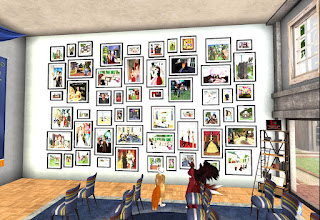 When we last met inworld in early June 2021, she was thinking of a couple things. Long knowing I was writing a sci-fi tale, she told me of an interesting story written by another beginning writer. She also wanted to show me the grounds of the Chilbo community, which after so many years had less territory but was still active.

A friend of Alleara's would say in her final days, she was increasingly ill. She was showing signs of Coronavirus, and planned to have herself checked at a clinic. But would pass away the night before a friend was to take her there.

Not just the Sunweavers and Chilbo, but Second Life has lost a great woman, with both brains and a good heart.

Update: Shockwave Yareach of the Sunweavers/Sunbeamer team, would have this to say:

She was my equal in building, though she had lots more time than I did early on. She was one of the first people I met inworld (Lusk if I recall.) We spent ten years trying to outbuild each other and finally just settled on mutual showmanship rather than competetion. She was horribly crippled from a car wreck, and got around the physical deformities by living in SL instead.
May God grant you ALL the answers, dear lady. Your suffering is ended at last, and your wings will free you from your prison.