With all the Linden Homes on the Bellisseria continent, the older ones have barely gotten attention lately. But recently in the thread about the latest Linden Homes, the Newbrooke, someone (Prokofy Neva) asked what was going to happen to the Meadowbrooke and the other older styles of homes. Patch Linden answered most would eventually be closed down. 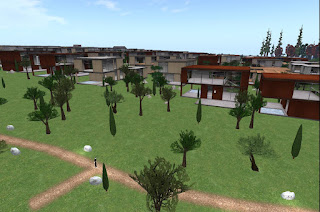 The old homes will be phased out and/or repurposed.  I've never hidden this fact, what I don't know yet is timing.  There is a balance I have to strike on available new Linden Homes vs the old and having enough supply to meet the demand of shutting down the old homes (also, blend of available themes to choose from).  I have also contemplated keeping some of the old because it tickles my historian bones, some of the various community center or landmark places with the old homes will be preserved.  Largely though, those regions will be shut down when the time is optimal. 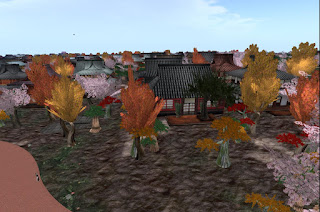 For those unfamiliar, besides the Meadowbrooke "California style modern homes," there are three other themes of early Linden Home  These are the Tahoe "rustic cabin retreats" outdoors homes, the Elderglen fantasy-themed homes, and the Shareta Osumai "traditional Japanese style" houses. These are located in three small continents far away from Bellisseria and the mainlands. They haven't been discontinued as options, and remain open for Premium account residents to get if they choose.

While Patch stated the Lindens plan to eventually close down the older Linden Homes, at least most of them, they won't be starting to do so anytime soon.