Man of The Year: Patch Linden 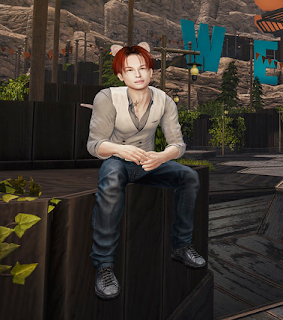 For quite some time, Linden Lab's Senior Director of Product has been quite visible, meeting with residents at various events, explaining what was going on with Linden Lab and Second Life, and answering questions the residents had. When CEO Ebbe Altberg/Ebbe Linden began appearing less, inworld and making statements, Patch more or less stood in for him.

After Ebbe Linden passed away, Linden Lab never did make anyone else CEO. Instead Patch helped fill in the role, notably the public part, with some of the decision making presumably taken up by Linden Lab's new owners, the Waterfield Network (just how much is known only behind the scenes), with Brad Oberwager/Oberwolf Linden standing out more than the others as Executive Chairman. Patch himself would join other Lindens in some Relay for Life fundraising, notably one event that was a twist on the "jail and bail" theme in which he spent time in the belly of a giant teddy bear until enough money was raised. He's also been more visible than Ebbe was in the forums, and sometimes appears in the Bellisseria group chat inworld.

With Patch as it's de-facto head (at least in day to day operations), Linden Lab and Second Life have continued to do well. More houses and more themes of the popular Linden Homes have been produced. There's been progress made on a mobile viewer. The number of privately-owned sims has gone up. The Lab has engaged in more partnerships, including one that resulted in a commercial that while it's impact on attracting new residents has yet to be determined has won some awards.

Not everything has gone perfectly under Patch. The decision to ban gacha machines no doubt hurt a number of content creators. And the Zenescope contest that stated winners would have to disclose real-life information raised some eyebrows as the Lab has prided itself on guarding the privacy of it's residents.

Patch isn't quite the CEO, so maybe he shouldn't get the full blame, or credit, of things that happened that Ebbe Altberg would. Still, with him being the new face of Linden Lab to the residents, and taking some time to talk to them, the Newser declares Patch Linden it's Man of the Year.

Stay tuned for our runner up.