On Monday April 25, Twitter announced it had reached a deal with billionaire Elon Musk for him to purchase the company for 44 billion dollars. This was the culmination of a series of events that began on April 4 when it was revealed he had bought 9.2 percent of it's stock, making him the largest shareholder. There was speculation that he would join the executive board. But instead he stated he had no intention. Instead on April 14, he announced he was offering to buy all of Twitter's stock. The immediate reaction of the board was to adopt a "poison pill" strategy, or limit anyone from owning more than 15% of the company. But apparently negotiations went on behind the scenes, and the board agreed to Musk's offer. 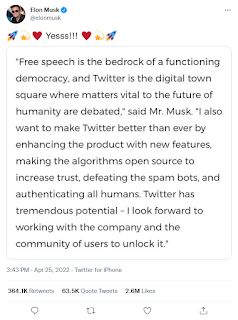 In a statement announcing the deal, Musk would say, "Free speech is the bedrock of a functioning democracy, and Twitter is the digital town square where matters vital to the future of humanity are debated. I also want to make Twitter better than ever by enhancing the product with new features, making the algorithms open source to increase trust, defeating the spam bots, and authenticating all humans. Twitter has tremendous potential – I look forward to working with the company and the community of users to unlock it."

With 83 million followers, Musk is already one of Twitter's most high profile users. He's also made some controversial statements. Reaction to news of the purchase had a political divide. Conservatives tended to view the buyout with optimism and cheers, many feeling Twitter has been biased against them and restricts free speech. Liberals tended to feel worry and concern, wondering if his efforts to encourage free speech might mean fewer filters against hateful rhetoric and what environmentalists consider mistruths about the climate debate.