The reaction to the Newser's April Fools article a few days ago was mostly positive. "Well played," one put it in one Discord thread. Another responded "Joker!" In Cyrillic. Still, I did get one mild complaint about the time the hack started not being right, and one angry reader whom felt I was making light of the Ukraine invasion. The answer is no I wasn't, but poking fun at the dictator and his trolls. I did think the joke had some risk, though felt just as many would appreciate an oppressor being made the butt of a joke. Still, it wasn't the one parody over the years that had gotten the most flak. Those that describe Second Life as about to be shut down due to glitches tend to get the most chuckles and the most boos.

And I'm sure the Uighurs and the people of Hong Kong appreciate a good "Winne the Pooh" joke.

As for Linden Lab's April Fool, what they did this year was more clever than their "Rick Roll" a few years ago. It was a step above their "Pandemonium" avatar insurance joke, this time poking Facebook/Meta in the ribs with it's virtual world Horizons having a very obvious flaw - nothing below the waist. They did three Youtube shorts, and mentioned them in three forum threads. The reaction to them was very positive. In my opinion, they were Linden Lab's best April Fool joke ever: a poke at the obvious flaw of the other virtual world that was genuinely funny. 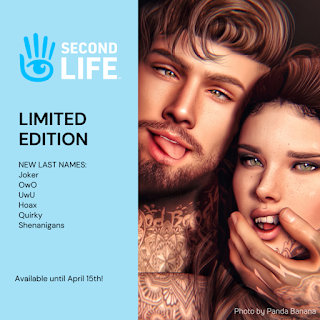 Besides the April Fool joke in the form of a few videos and forum posts, Linden Lab had something else on April 1st, They had six new last names, with a humorous theme.

Some may remember OwO and UwU from last year as the April Fool themed limited edition surnames for 2021. It seems they proved to be popular enough for the Lab to bring them back. But they won't be available again for too long. As the announcement stated, after April 15th, they'll be gone.

There were more examples of funnery. The Juicybomb blog posted a joke article of Linden Lab being bought by Facebook/Meta. The news was delivered by a Half Linden, “This transition will take place over the next few months, and we will do everything we can to make it as smooth as possible. Don’t be alarmed if you notice your legs disappearing; this is a new user function.”

Some games also had some April Fools stunts. Among them, the WW2 shooter "Enlisted" had a "Battle For The Moon" campaign.

That's all for now with the April Foolery. Hope yours was a good one.

Posted by Bixyl Shuftan at 2:03 PM