There's nothing quite like a scene of a boy and his dog. But what if the boy's a furry catboy, and the dog is big enough to ride like a pony? That came to mind when I saw someone resting next to his huge canine while going through the Fairelands. As the canine had a saddle, it looked like he had stopped to rest while going on a ride, and the dog still being a dog wanted to rest with him. 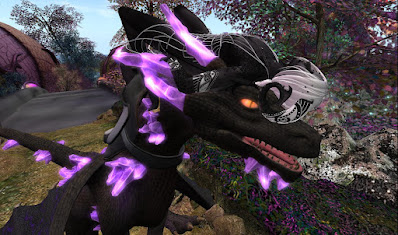 Another rider had another choice location to rest on, on top of his dragon's head. Hope that draggy's a tame one.