It's been about a month since we last discussed how the Russian invasion of the Ukraine was being reflected in Second Life. Since then, there continue to be fundraisers to help out the Ukrainians, such as the one at Union Passage posted here a few days ago. The Marketplace has dozens of Ukraine-related items. And people are continuing to dress in blue and gold, or wearing blue and gold items, such as this back pocket cloth seen at a Relay for Life event (left).

Of the protests in the Moscow Island sim in which the demonstrators found themselves restricted to one tiny out of the way corner, returning to the place, there was one large sign asking people to please stop.

Our island does not belong to any country, it is a private territory. We are not a political organization, this iz just a historical sim, so please do not gather here whit political slogans! Thanks 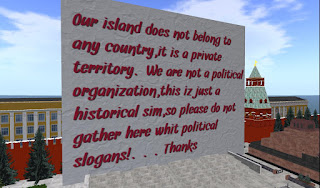 One question that I've heard is what happens to Russian residents in Second Life? I've had people tell me that friends from the country are being IMed with insults. While the invasion has been marked with atrocities by Russian soldiers against Ukrainian civilians, it's also seen other soldiers sabotage equipment, thousands of Russians being arrested for demonstrating against the war, leaving the country, and Russians taking up arms in support of Ukraine against the invasion.

With Paypal stopping business in Russia, as well as other means to trade Rubles for Lindens and vice-versa, Russian residents are increasingly unable to buy Lindens or cash in on any Second Life businesses. Hamlet Au recently interviewed one, whom had taken part since the start in helping out Ukrainian residents, and stated he was seriously considering leaving the country as his business was so successful compared to real-life job prospects. But some others who don't have that option may end up having to close their places down due to inability to pay, or possibly leave Second Life for a while if not being able to access money from a Second Life business leads to economic hardship.

The gaming industry has also seen a number of reactions, such as Blizzard and Epic Games halting sales in Russia. It should be noted that Wargaming, best known for "World of Tanks" and "World of Warships," got it's start in Belarus in the 1990s, but since moved its headquarters out of the country. Following the invasion, it fired one of the staff whom made some comments in support of the war. And a few days ago, it announced it was withdrawing completely from Belarus and Russia. The following was posted on it's Discord channel:

Over the past weeks, Wargaming has been conducting a strategic review of business operations worldwide. The company has decided it will not own or operate any businesses in Russia and Belarus and will leave both countries.

Effective March 31 2022, the company started the process of closing its studio in Minsk, Belarus and transferred its live games business in Russia and Belarus to local management of Lesta Studio that is no longer affiliated with Wargaming. The company will not profit from this process either today or going forward. Much to the contrary, we expect to suffer substantial losses as a direct result of this decision.

Going forward, in all other countries Wargaming will continue to operate World of Warships as before. The game servers will be operating as usual, and players' accounts, as well as their in-game property accumulated through purchase or any other means, will remain unchanged.

No doubt there will be more developments in this ongoing story.