In what is either an escilation in the growing tensions between Russia and the West, a massive troll by pro-Putin hackers, or perhaps both, residents of Second Life are getting re-routed to the wrong virtual world. 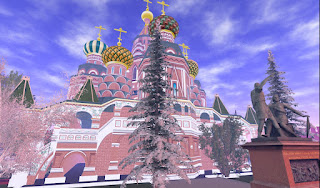 Starting at 1 PM SL time March 31 (Midnight Moscow time), a few residents in Russia, Turkey, and east Africa were finding trying to login to Second Life, they ended up in another virtual world entirely. The entry area looked like Red Square in Moscow, complete with the Kremlin and Lenin's tomb. As time went on, more and more residents in more and more countries, starting when their own region reached Midnight, found themselves in this place as well. As of the writing of this article, a few residents in Eastern Standard Time in the Eastern US, Quebec & Ontario, and Columbia & Peru are posting on Facebook that they've somehow logged onto there. Logging out and logging back in, they end up back in this other virtual world. 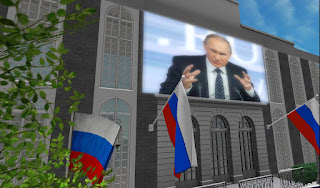 This copy of Second Life is called "Putin World." Going beyond the Red Square area, there's a much smaller number of sims than Second Life. There are Russian cities with cheerful workers, Russian towns with happy locals, Russian farms with happy peasants, slums with banks flying American and European flags, with unhappy masses, WW2 battle scenes showing retreating German soldiers fleeing from T-34 tanks, and woods with builds of a bare-chested Putin riding a bear. Everywhere are signs describing Putin as the "glorious leader" who made Russia great again, and that anyone opposed to him is either a fool needing institutionalization, or a criminal needing prison.

So far, only a tiny fraction of residents have been re-routed. But the number has been growing as time goes on. Linden Lab is investigating the hacking, and trying to come up with a solution.

Update. Linden Lab has announced that they've come up with a patch that will prevent residents from being sent to Putin World, and should fix affected accounts and send them back to Second Life.