Ten Years Ago: Linden Lab Steps Away From Birthday Events 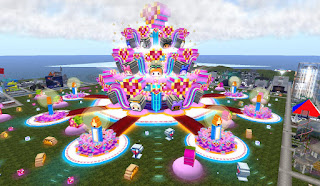 It was ten years ago today, April 18 2012, that Linden Lab dropped a bombshell on the residents. There was a short announcement from the Lab, "This year we will focus the spotlight on community events." While not spelled out, it was clear that the Linden Lab would not be doing a Second Life Birthday event that year, no SL9B.

Some residents didn't care less, "If Linden Lab doesn't care enough about Second Life to celebrate it's birthday, why should I?" But there were many people who were sad and upset. What would Second Life be with out an anniversary celebration? It wasn't long before certain people were communicating and organizing. And before long, there was a team of volunteers whom were going to do a resident-run Second Life Birthday celebration, on land provided by sponsors. Word was spread in part through some amusing "Prim Reaper" videos.

So why did Linden Lab stop doing the SLB events? The move was done under Rod Linden, a time when the Lab was putting some distance between the residents and itself, such as canceling the "Kiss a Linden" event, the Linden snowball fight, and the Second Life convention. So canceling the Birthday may have been part of the distancing. But that may not have been all. It had been suggested that Linden Lab may have wanted to get away from the drama that some of the more recent celebrations had seen.

"The Birthday" went more or less smoothly, opening on time with numerous exhibits and a few stages, notably the Cake Stage by Mikati Slade. The Newser would have it's own exhibit, an office building with a hat on it. It would go on for a couple weeks, and went off with a bang, with the Lab doing nothing more but letting it happen.

For a few years, this was how the SLB events went. Then the Lab started organizing a paraell music event, "Music Fest." There would also be "Meet the Lindens" events. The Lab was slowly becoming more and more involved. 2018 would see the last of the resident-run Birthday events, the SL15B. In February 2019, Linden Lab announced it would be in charge of organizing the anniversary events. On the whole, the residents were pleased to see Linden Lab once again running The Birthday. But, many did miss the Cake and Stage Left stages that marked the resident-run Birthday events.