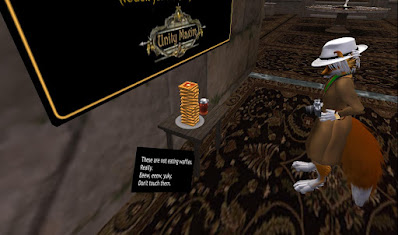 So why would an appetizing stack of waffles with butter and syrup need a sign that says, "These are not eating waffles. Really. Eeew, eeew, yuky. Don't touch them." Well, anyone familiar with Raglan Shire's tinies know the wee folk there go bonkers over waffles. So why would the stack be there? Well, maybe as a trap for the Fairlands "pawlice"to nab people for the Faire's "Jail and Bail" events.